Barcelona, Nairobi, Amsterdam, Brussels, Dublin, Sofia, Tirana - 25 May 2022.- On Wednesday, 25th May 2022, project partners, city representatives from Brussels, Dublin, Sofia and Tirana and other stakeholders working on digital rights came together for the high-level announcement of the Digital Rights Governance Framework project.

During the session, which was held online, the panel reflected on why governing human rights in the digital environment is an urgent priority for cities, introduced the Digital Rights Governance Framework and presented the first four European cities that will pilot it. 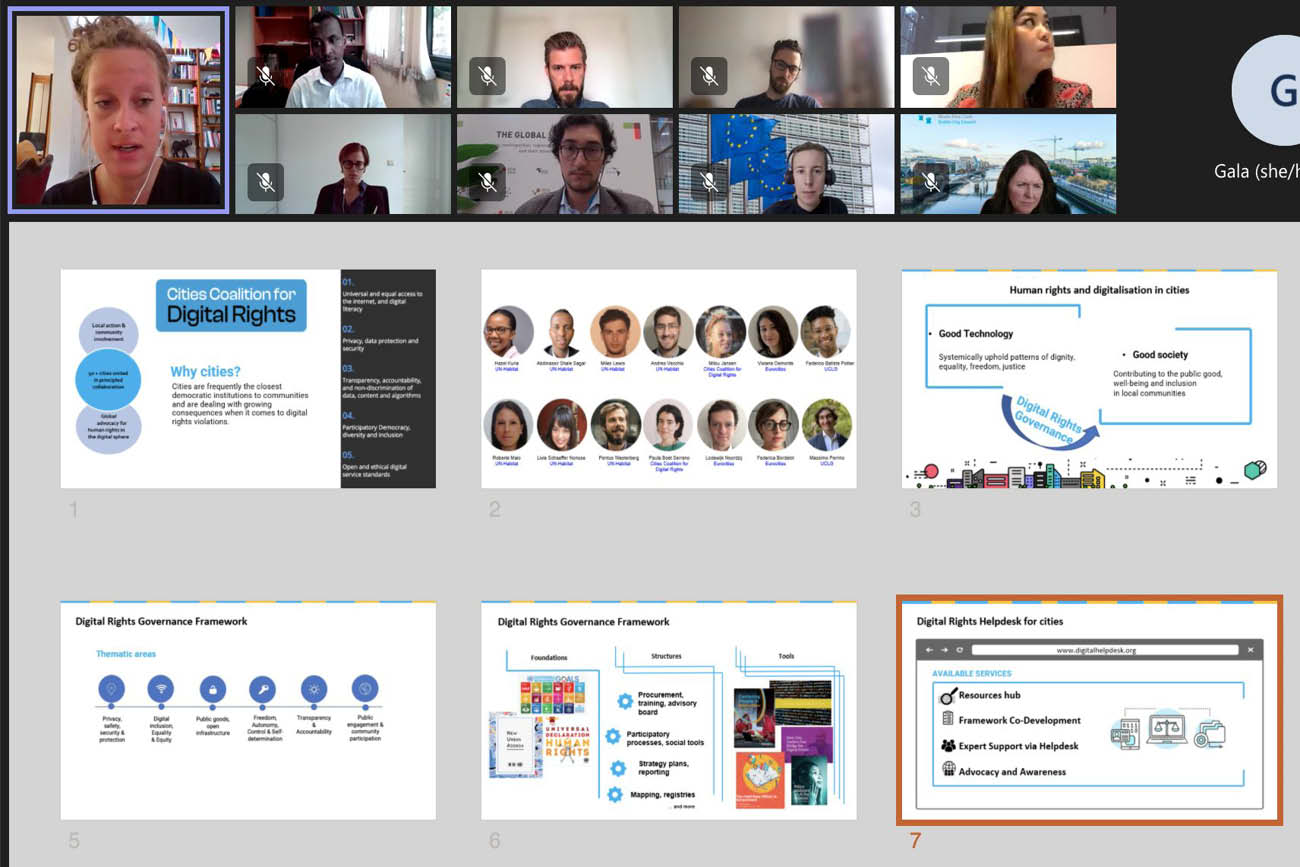 Governing digital rights is an urgent priority for cities

The round of interventions was opened by Nóirín Ní Earcáin, Policy Officer, Technologies for Smart Communities at the European Commission, who placed emphasis on the leadership role cities have when it comes to ensuring the same rights people have offline are also respected online. As examples from Living-in.eu show, cities have a key role in building a cohesive, digital Europe, where sustainability, empowerment, security and freedom are at the centre of the digital transformation.

Massimo Perrino, Policy Officer at United Cities and Local Governments, gave insights on how digital rights can be mainstreamed in local governments through other key issues such as education or inclusion, and explained how there is a need to mainstream human rights in technology-related policies.

Perrino also pointed out that international policy-making processes are increasingly paying more attention to the topic of digital rights, which are becoming a priority in forums such as the United Nations’ High Level Political Forum on Sustainable Development or the U20.

Federica Bordelot, Senior Policy Advisor at Eurocities celebrated the launch of the Digital Rights Governance Framework project for making a reality the five principles of the Cities Coalition of Digital Rights, to which more than 50 cities have adhered over the past years. She also pointed out that the project “is key to achieving Europe’s Digital Decade targets for 2030 and to strengthening democracy in the digital environment”, and warmly acknowledged the four pilot cities for their involvement in the project.

Pontus Westerberg, Programme Management Officer at UN-Habitat, offered some insights with regards to what makes smart city projects truly people-centred: commitment to human rights, digital inclusion and aligning the digital transformation with broader urban goals, such as affordable housing, quality public spaces or mobility services. This view, which is central to UN-Habitat’s People Centred Smart Cities Programme, frames digital rights in a broad and comprehensive way and offers a strategic approach to technology to improve life in urban areas.

Such a pressing topic -ensuring human rights are protected and promoted in the digitalisation of cities- and the challenges associated to it inspired the creation of the Cities Coalition for Digital Rights by Amsterdam, New York City and Barcelona in 2018, and encouraged the collaborative work with the partner organisations to create a common normative ground for city governance of digital rights.

Milou Jansen, Coordinator of the Cities Coalition for Digital Rights and Lead digital ethics & rights, City of Amsterdam, looked back into the work that the Coalition and partner organisations have carried out together, and celebrated the Digital Rights Governance Framework as a milestone that combines the lessons learned and gives body to the 5 foundational principles that the Coalition stands by.

Jansen explained the components of the project: a normative yet pragmatic Framework that has been co-created by experts from cities, organisations and civil society and a Helpdesk that will support cities to translate the Framework’s concepts into their daily work. The Framework, which is conceived as a living document that will evolve to adapt to the fast-paced evolution of digital technologies, has already been iterated to incorporate feedback from its first readers, and a second version will be published in early June.

Regarding the Helpdesk, Jansen illustrated how the platform will contain a repository of resources, an expert support booking system or advocacy and awareness materials that will be made available for all cities in the world during the first half of 2023.

The floor was then passed on to the representatives from the four European cities that will pilot the implementation of the Framework, which explained what digital rights challenges they are facing at a local context and how they can be addressed through this project.

The city of Tirana will work on setting the digital rights foundations at a city-wide level, as well as enhancing the capacity building of the local staff and citizens.

Fabian Maingain, Alderman for Smart City of the city of Brussels, highlighted tackling the digital divide, granting participation and informing citizens in a transparent way as key priority areas for the city. According to Maingain, the city is looking forward to the pilot to build a coherent and complete action plan to cover all of the city’s priority areas; formalise the commitment to digital rights and incorporate the protection of digital rights within existing digital strategies. Through the pilot and the capacity building that will come with it, explained the Alderman, “citizens and other actors in Brussels will become more aware of the importance of digital rights”.

The City of Dublin,  according to Eileen Quinlivan, Assistant Chief Executive at Dublin City Council, “has among its strategic priorities the improvement of the use of technology and data in service delivery, as well as the mainstreaming of human rights”. With such a scope, during the pilot, the Smart Dublin team will prototype and develop a  foundational educational module for students and city council staff on digital rights, to promote the principles of ethics and privacy relating to new and emerging technologies.

Mr. Gencho Kerezov, Deputy Mayor of Sofia for Digitalisation, Innovation and Economic Development, highlighted the importance for Sofia Municipality to incorporate digital rights and digital inclusion into city-wide strategies and policies. As part of the pilot the City of Sofia will develop a self-assessment methodology to measure the administration’s capacity to achieve a resilient digital transformation; detect and develop the specific deliverables that need to be fulfilled and work on the terminology around digital rights to ensure the principles the city is already committed to align with them.

Next steps for the Digital Rights Governance Framework

As Abdinassir Sagar, Associate Program Officer, Innovation at UN-Habitat pointed out in the closing remarks, the event was a milestone for the operationalisation of the Framework, but it was only the start of a journey that will expand until the second half of 2023.

According to Livia Schaeffer, UN-Habitat, after having co-created the Framework and identified the pilot cities’ challenges, the project will now focus on the design phase, in which the project team and the city staff of the four cities will define a roadmap that will include the priorities and key actions that will be carried out during the pilots, which will start in august and expand throughout the months of autumn.

During the pilot phase, a beta version of a digital helpdesk platform will be built and tested with the cities. This platform will contain a repository of Digital Rights resources and a booking system for cities to schedule consultancy sessions with experts.

After the pilot phase, based on the project findings and learning, the concept of the ‘helpdesk’ and its support services will be scaled to other regions and cities.