Last autumn, Barcelona City Council conducted a survey of 2,542 residents in the city in order to analyze the impact of the COVID-19 pandemic on the use of information technologies, with the aim of assessing the evolution of the digital divide in the city since the last survey conducted by the City Council in 2016, as well as the change in behavior in relation to the use of information technologies by the city's residents. The survey revealed that the digital divide has narrowed significantly in the last 4 years.

Based on these surveys, the City of Barcelona, together with Mobile World Capital, has published a report "The digital divide in the city of Barcelona". This document has been conceived as a diagnosis, identifying the groups most vulnerable to falling behind in the technological revolution.

According to Barcelona City Council in its report executive summary which you can read and download at the end of this post, the reduction of the digital divide has highlighted pre-existing factors that continue to condition the type of access and use of ICTs, which the council identifies as age, income, and level of education.

Age is a factor that affects internet access among the older population and, especially, the way the internet and ICTs are used. The number and diversity of uses decrease as age increases. Meanwhile, the level of education impacts both uses of these technologies and the type of devices used, and income conditions ability to work remotely, and resources and skills to continue with education online, among other aspects.

Just 8.1% of households do not have internet and the majority of people in this percentage are over 74 years old. Therefore, the degree of internet access in the home is closely linked to age. Furthermore, it is a good fact that the degree of Internet access among low-income households has increased from 75.7% to 91.8%, narrowing the divide with high-income households by only 6 percentage points.

Currently, 89,8% of city residents go online daily, but 35% of people over the age of 74 have never done so. According to the executive summary, the other main factors influencing Internet use are educational attainment and employment status. However, the most obvious divide is that of age, with people aged 16-34 doing the most everyday online activities, after which this figure slowly descends with age. 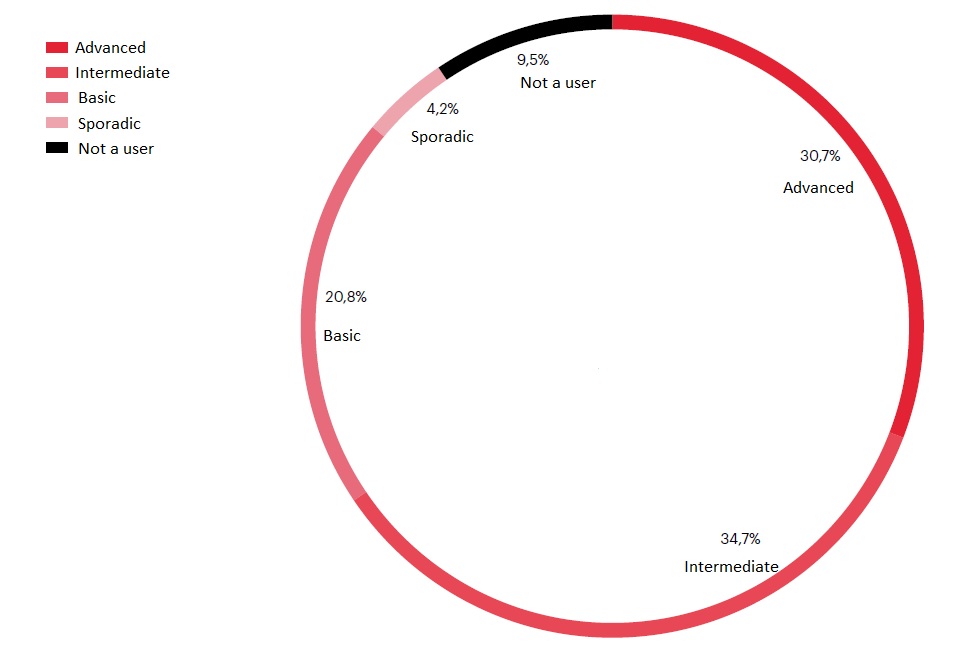 Distribution of the profiles of Internet users and non-users in the population of the city of Barcelona. Source: MWCapital

One expected outcome of the study is that the use of ICTs has experienced significant growth during this COVID-19 pandemic crisis because remote working, online education, and e-Government procedures are at the heart of this increase, which appears more pronounced in middle- and high-income areas than in low- and middle-income areas.

The study also addressed the use of e-Government by Barcelona city residents and revealed that the lockdown and health crisis situation has caused e-government procedures to skyrocket; 75% of city residents now use ICTs for procedures with the public administration, though this varies according to age, income, and level of education.

While it is true that in the last four years, and especially in the last year due to the pandemic crisis, the digital divide has been considerably reduced, this study and report have revealed that there is still work to be done in the field of digital inclusion by the city of Barcelona, since there is still a structural divide, as there are still those who do not have access or the necessary equipment to carry out their daily lives, but also a situational divide, which is evident when connectivity becomes the basic infrastructure for work, education or relations with the administration, among others.

The survey results can also be viewed openly and permanently in the following places (available in Catalan and Spanish):